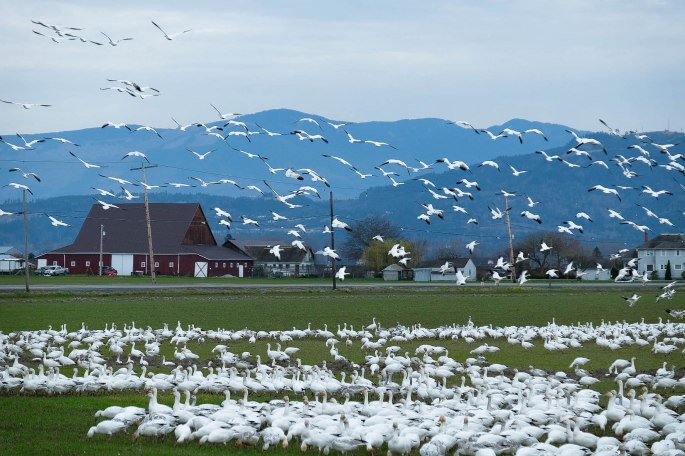 Have you ever been in a position where you followed the crowd or group, and don’t even know why or what it was about it that made you fall in?  A week or so ago, my hubby and I went for a drive so I could take some pictures.  We stopped out by a reserve to watch all the snow geese in the field.  The field was totally white!  I couldn’t get them all in one photo without being far enough away that they were specks.  However, watching those geese whirl around in the sky as they flew from place to place was amazing!  I took some pictures and noticed some things about them as I watched their behavior.

They obviously came to eat and with that many of them, I got such a kick out of the behavior!  If there was one or two that took off for another section of the field, you would see one, and then two and three, and then a group of them take off over to that area.  I mean, if there was something better over there, they were going for it.  Pretty soon, one would take off and the same ritual would take place and a big flock of them would go away from the others to another area.  Now, when the larger flock

took to the sky, it was pretty amazing!!!  I also loved watching their landing gear;  their web feet straight down for ground touch down.  I watched them for quite a while.  Then, all of a sudden, everyone fell in to formation and they were ALL moving in one direction, honking and feeding as they went.  If one was the dreamer type and wanted to experience this movement, it was soon bit or goosed on the hind end to let it know to fall in and quit goosing around!  Or if one was looking to see what the others were doing, the same thing would happen.  They are honking like crazy.  SO noisy, even as they eat!   I had to laugh at it, but then I thought, can we relate to that behavior?

Have you ever strained your neck to see what was going on in the life of another just so you could be in the know?  Are you a dreamer type, and everyone keeps trying to get you to fall in and be like everybody else?  Do you have someone in your life who keeps goosing you to get you to keep moving ahead and paying attention?  Or maybe you are rubbernecking to see what might be better out there than what you have where you are?  I know I have been guilty of some of that.  I have been, and AM, a dreamer and creative person.  I don’t think like others and I don’t always do what others expect.  Then I am the one getting a goose in the back side and sometimes a bit of honking to let me know I’m not doing what is expected.  I have also sometimes been the “gooser” to someone else I thought might need re-directing.  Now I’m not saying we don’t all 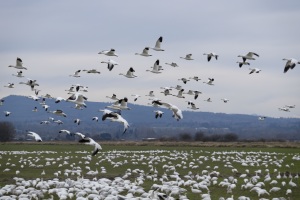 need re-directing at times.  We do.  We may need that goose to hurt a bit if we are to stay focused on what we are supposed to be doing.  As for rubbernecking?  I have certainly been guilty of rubbernecking and comparing where I am to where others are, or having or not having what another may have.  As for the honking?  Well, some of our conversations can be like honking.  We are making noise but no substance to what we say.  It would be like blah, blah, blah, only honk, honk, honk!  So… it was quite a lesson to watch life happen in a field with snow geese as the teachers.  God will use anything, anywhere, if we listen!

What I decided is, that I have pretty much always been the one to fly to the other spot, or the unknown, and see what I can see and learn what I can learn.  Eventually, others may follow when they see what I have found.  I don’t mind going alone.  I like to explore new places and new ideas.  I believe God made me that way.  So when I fly off, it makes me happy to see others follow; not that I am that great, but that God has used me in some way, so that, someone else sees the benefit of flying over to see the new thing God is doing.  If He takes care of all the birds of the air, and ALL of these geese that fly in, we should never worry that He won’t take care of us, even IF we have to get goosed once in a while!  God, through the Holy Spirit is great at goosing us when we need it!  As I watched the geese move in mass as they fed, most of those geese in the back would have to get what was left when the whole group had gone through it ahead of them.  However, the crowd was pushing them on so they couldn’t get too greedy about eating it all in one spot. 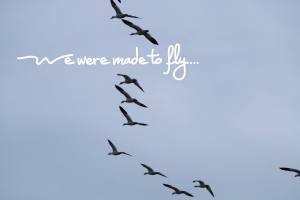 Tuck your wings in and walk where God places you to walk.  When it is time, He will tell you.  Then,  spread those wings, tuck your feet and even honk a bit!  But remember, you may have to fly in alone at first, but we know we are never alone, because we have God by our side.  Ask God.  And then…spread those wings, catch some air, and fly!!!!

Walking (and sometimes flying) the journey with you…

4 thoughts on “Do You Need A Little Goosing?”

I am enjoying the Journey!